Five years in and facing the potential of multiple challengers in the upcoming municipal election, District 5 City Councillor Timothy McCarthy says he still brings a public works sensibility to his job.

“I think you look at what I care about the most, which is infrastructure, and what you see outside your front door, I would say that District 5 looks and feels better than it did when I got there,” he said during an interview with the Reporter at his council office. “Which is what I told my kids when I was coaching: ‘Make sure the dugout looks better than it was when we got here.’”

To hear him talk, traffic, transit, and the basic functionality of the street are at the forefront of the councillor’s mind. If a neighborhood does not have a good flow, he notes, people just move through it without stopping for a bite, a coffee, or some holiday shopping.

A visit to Vancouver blew his mind, McCarthy said, with the Canadian city’s approach to encouraging its population to walk, bike, or ride public transit to work. He emphasized the mixed-use housing there where residents living above a store have priority for its jobs. Vancouver’s older tram cars with their antique replica exteriors over new and modern bones could serve to inspire care for the PCC cars in Mattapan, he added.

District 5 is an amalgam of three demographically different neighborhoods - Mattapan, Hyde Park, and Roslindale. Of Irish descent, McCarthy points to his team, which comprises a seasoned public works employee, an attentive Boston Public Schools parent, and a Haitian staffer fluent in Creole, as critical to representing the district.

“My district is the most diverse district, and I tell people all the time, “If you want to see what Hyde Park looks like go to Fairmount Grille and you look around,” he said. “It’s black, white, Hispanic, gay, straight, you name it. That’s literally the palette of what my district is. We have a lot of places like that. And the thing is with Mattapan or Roslindale and Hyde Park, it’s not Boston’s best-kept secret anymore. It’s bubbling over.”
Some pressures are universal, McCarthy notes, with the tug between old and new rearing its head in each of the neighborhoods.

Mattapan can feel split between jurisdictions, he said, because it is partly covered by three council districts and three state representative districts. “So, it’s like they always feel like they’re kind of the ones left out, and, honestly, over the last 20 years they had been left out. You know, the rest of the city’s going. But now they’re no longer a secret. Developers are starting to notice.”

The questions he hears are: What form should the development take — Non-profits? Private investment? New young professionals, The maintaining of existing homeownership stock? And how can the conflict between those options be balanced.

The neighborhood is starting to see movement with a major city planning study centered around Mattapan Square, but with its district lines blurry, in part, McCarthy said, because elected officials want to let the residents carve out the footprint.

He gave a shout-out to the Mattapan Patriots Pop Warner program and said that he and Council President Andrea Campbell work in concert to highlight the good in a neighborhood too often associated with violence to “make sure that Mattapan gets on track with who they are, who they want to be, which is important.”

As to legalized recreational marijuana, which he has opposed, McCarthy had a nonplussed air about him as he focused on the nuts-and-bolts of addressing community concerns in a legal industry that still raises suspicions. There are two proposals so far in Mattapan, and a Roslindale dispensary proposal drew loud opposition at a recent meeting.

Roslindale is a mash of community groups and Main Streets groups and “everybody really, really cares,” McCarthy said. He said he felt once like a “sheriff” between the local board of trade and the Main Street group, but “we‘re starting to get people rowing in the same direction and that is the most important part of what‘s happening.”

The neighborhood’s status as a thriving business district is a blessing and curse, when it comes to home prices, McCarthy said. “You can’t touch a house there.”

Where he grew up in Readville, he said, it was mostly train yards that are now zoned light industrial. With developers looking to put up hundreds of units in Hyde Park, McCarthy said the residents are often divided generationally.

“You have a lot of my neighbors who I grew up with grabbing me after communion in the parking lot, saying ‘You‘re going to stop this.’ And on the same hand, you have a lot of the young people moving in saying, ‘this would be great because markets, retail follow rooftops and we can do this, we can do that.’” 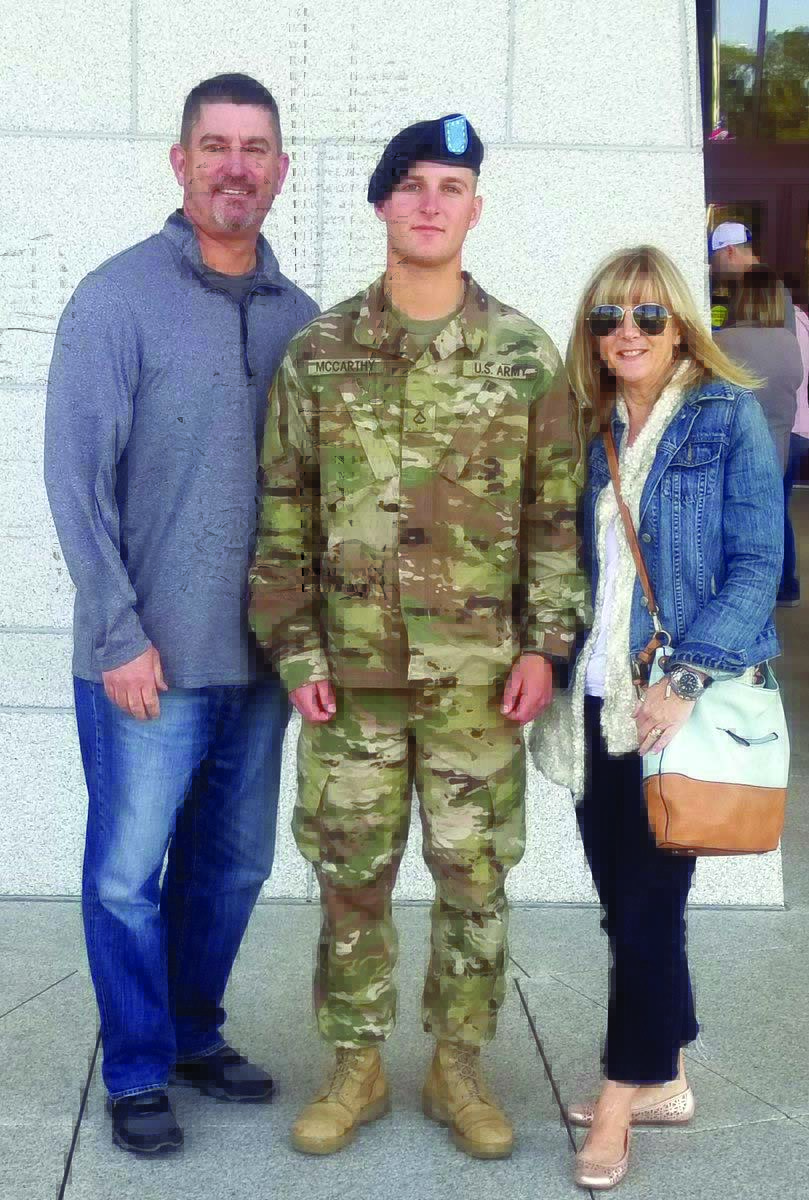 McCarthy was first elected when he hopped into a busy council race in 2013 when then-councillor Rob Consalvo was moving to mount a campaign for mayor. A Hyde Park resident, the new candidate was a veteran of the Menino administration at that point, having been hired in 1993 as a neighborhood services coordinator. He worked his way up into running the summer jobs and youth programs in the city’s Parks Department, where he stayed for 10 years before being promoted to executive commissioner of Boston’s Public Works department.

When Consalvo gave him a two-day heads up that he planned to run for mayor, McCarthy and his wife Maureen, who have two sons together, had a quick decision to make. “That night we went to dinner and we talked about it at length,” McCarthy recalled. “And, of course, we‘ve been married now for coming up on 23 years, so she knew the business and, uh, I‘ll never forget, she looked at me, she goes, ‘Well, here‘s the deal. You either run now and win, or never bring the subject up again.’”

When voting in an eight-person race was over, McCarthy won with 24.3 percent of the primary votes, and 54.6 percent in the general election, besting Haitian community activist Jean-Claude Sanon in each contest. He defeated Sanon again in the 2015 general election by gathering 64 percent of the vote in an off-year election.

He ran unchallenged in 2017, but this time around, he said, he is looking forward to a competitive District 5 race.

Earlier this year, McCarthy welcomed Gov. Charlie Baker to the district, a move some chafed at as an endorsement of the Republican in the midst of a progressive wave.

“It is what it was,” McCarthy said. “I like Charlie Baker. I have no qualms about saying [that] if I didn‘t like him, I wouldn‘t have gotten up there and said welcome to my neighborhood. But when the governor says, ‘I‘d be honored to have you introduce me,’ guess what? I was honored to introduce him and seven out of ten people in Massachusetts believed the same thing. So, you know, I wasn‘t introducing the crackpot. Having said that, I think the old saying of ‘we can disagree but let‘s not be disagreeable … is kinda gone to the wayside now.”

In next year’s non-mayoral cycle, with the biggest draw to polls likely to be a crowded at-large council race without Ayanna Pressley’s name on the ballot, 2019 has the potential to be a low-turnout race.

“As far as competition goes,” McCarthy said, “I‘ve been coaching. I played football and baseball in college. I‘m a competitor. It‘s an open market, and if anybody thinks they can really do a better job than me, then go for it.”

He says the “proof’s in the pudding” on his track record as he highlighted basic infrastructure improvements as well as the reconstruction at Healy and Fallon fields, playgrounds, Almont Park, and the Reservation Road work coming next year.

“The Mattapan Library has been reconstructed,” he said, “and we have $11.3 million coming to the Roslindale library.... I think people are happy with what they see outside the front door now.”

The council will not be his life forever, McCarthy said, but he thinks he has a good term left in him. “I would argue that probably— I would say pretty confidently —that next year is going to be my last, my last role. I don‘t think you can do this job forever. I‘m not a term limit guy, but I‘m a term limit guy for me. I want to do other things.”

“I went to the Harvard Business School for a reason,” he said. “I got my master‘s in public administration for a reason. It will be a time when I want to move on. But I will tell you, whoever wins this race — and I plan on having it be me —I think it‘s important that the voters realize that you want to have somebody who‘s been involved from the get-go. You‘re not gonna want somebody who parachutes in and says, ‘Hey, look at me. I‘m going to get involved now because I‘m running for city council.’ And a lot of the opponents do that. And that bugs me the most.”