Walking into Holistic Ink, a tattoo and body piercing shop at 1261 Dorchester Ave., customers are likely to be greeted by a 3-year-old girl doodling behind the front desk. She’s the daughter of the resident piercer and occasional tattoo artist Jamie Rivera, and the first indication that Holistic Ink, the only tattoo shop in Dorchester, is a different kind of place.

Holistic Ink is so named not because it’s “healthy,” as many assume (“English is my second language,” Nguyen says with a laugh), but rather for its approach to tattooing: Look at the piece as a whole, be unafraid to change the approach accordingly. 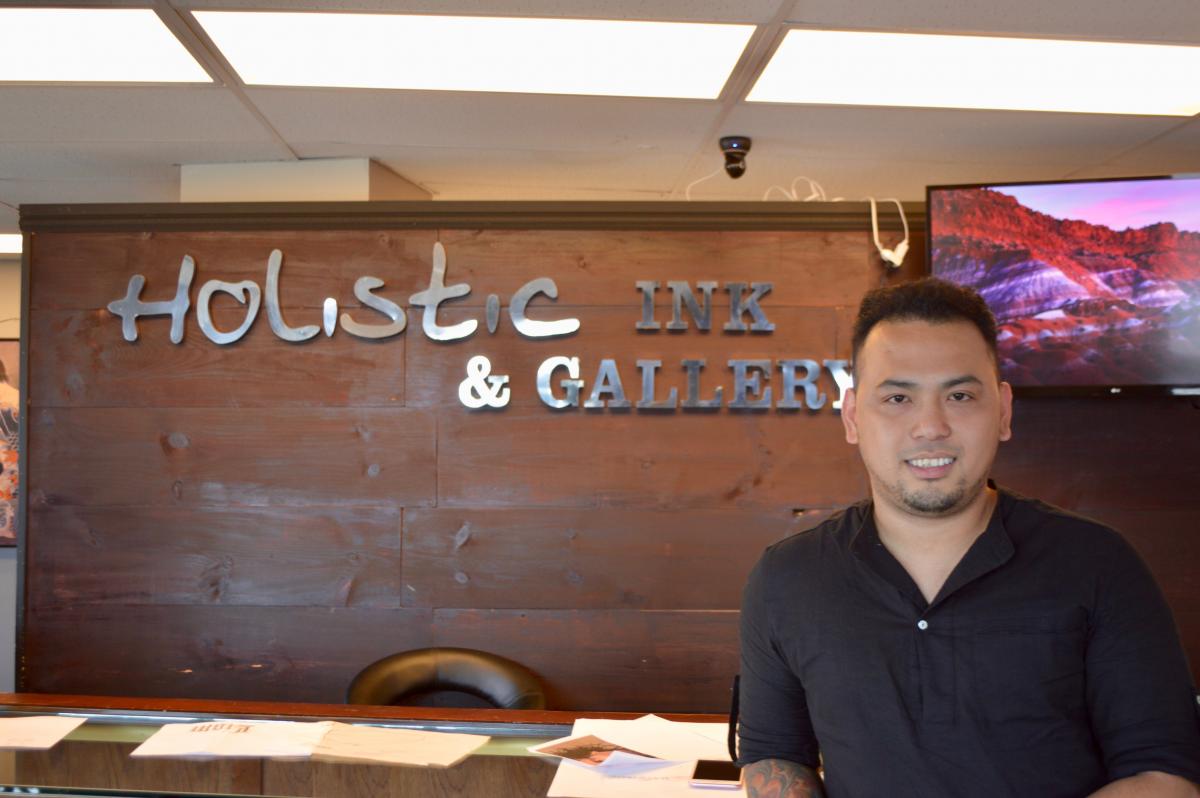 Nguyen opened the shop in Glover’s Corner in 2016 after spending several years with his mentor, Tuyen Tran, at Timeless Ink in Everett. He worked as a bartender, a real estate agent, and a nail technician before he took up body art. He got his first tattoo – lettering that reads “a man of family” – a decade ago and liked it so much that he bought a tattoo kit and brought it into the nail salon where he worked.

He was watching an instructional video when a co-worker came by and asked him if he did tattoos. “I was like, ‘I’m watching the video! I obviously have no qualifications or any credentials,’” he said, again with a laugh. Nonetheless, he inked his first tattoo, a flower, on her wrist. “It was decent,” he said.

Nowadays, he has a month-long wait list from clients eager to have his skilled hands at their disposal. Since he opened his shop, Holistic Ink has completed roughly 1,600 tattoos and boasts a staff of five: two permanent makeup artists, two tattoo artists, and the piercer Rivera.

Although he now lives in Randolph, Nguyen considers himself a Dorchester guy. He was raised in the neighborhood and wanted to open the shop on the avenue to “give something positive to the community that I serve and love.”

“My whole childhood was here,” he added. “My church is here, my best friends, my fiancé, the food I eat – it’s all here.” It took 15 months to secure licensing for the shop, and a robbery stalled the grand opening. “They took everything,” he said, “but it’s just stuff.”

The 26-year-old Rivera came to Holistic Ink after his apprenticeship at Body Xtremes in Quincy. His story is similar to Nguyen’s. He hadn’t thought about getting into the tattoo industry until, well, he did. Always artistic and “different,” he had a six-year scholarship and was on track to becoming a history professor when he gave his first tattoo, his name, to a girl he was dating at the time. He then gave up the scholarship.

Rivera began in serious fashion with a few tattoos here and there (his first was the lips of another former girlfriend tattooed on his neck, a design now hidden), but he is now at work filling his entire body with them, with only his palms and the front of his face scheduled to remain untattoed– until he turns 40. “I’ve gotta see how I age,” he said.

Tattooing isn’t the only body modification he has made: He has multiple implants, from a captive bead ring on the back of his hand (signifying he’s a piercer) to a small pair of horns on his head (inspired by the 2005 film “Modified”) and a split tongue. “Other than my kids, this is the only thing that I’ve fully committed to,” he said in reference to his body art.

That said, Rivera acknowledges that he hates getting tattooed. “I’ve always been the guy who needs ten guys holding one arm down, and ten holding the other,” he said.

So why cover himself? “Why not?” he responded as he worked on a client who was sitting in the chair unflinchingly, seemingly entranced by Rivera’s various implants. “Body art allows me to live how I want,” he said. “Yes, there are a lot of people who stop and stare and ask questions. I’ve been used to that for as long as I can remember. It’s a form of expression, a form of rebellion, something that allows people to do what they want to stick out.” He quickly adds that he doesn’t necessarily always do it for that reason. 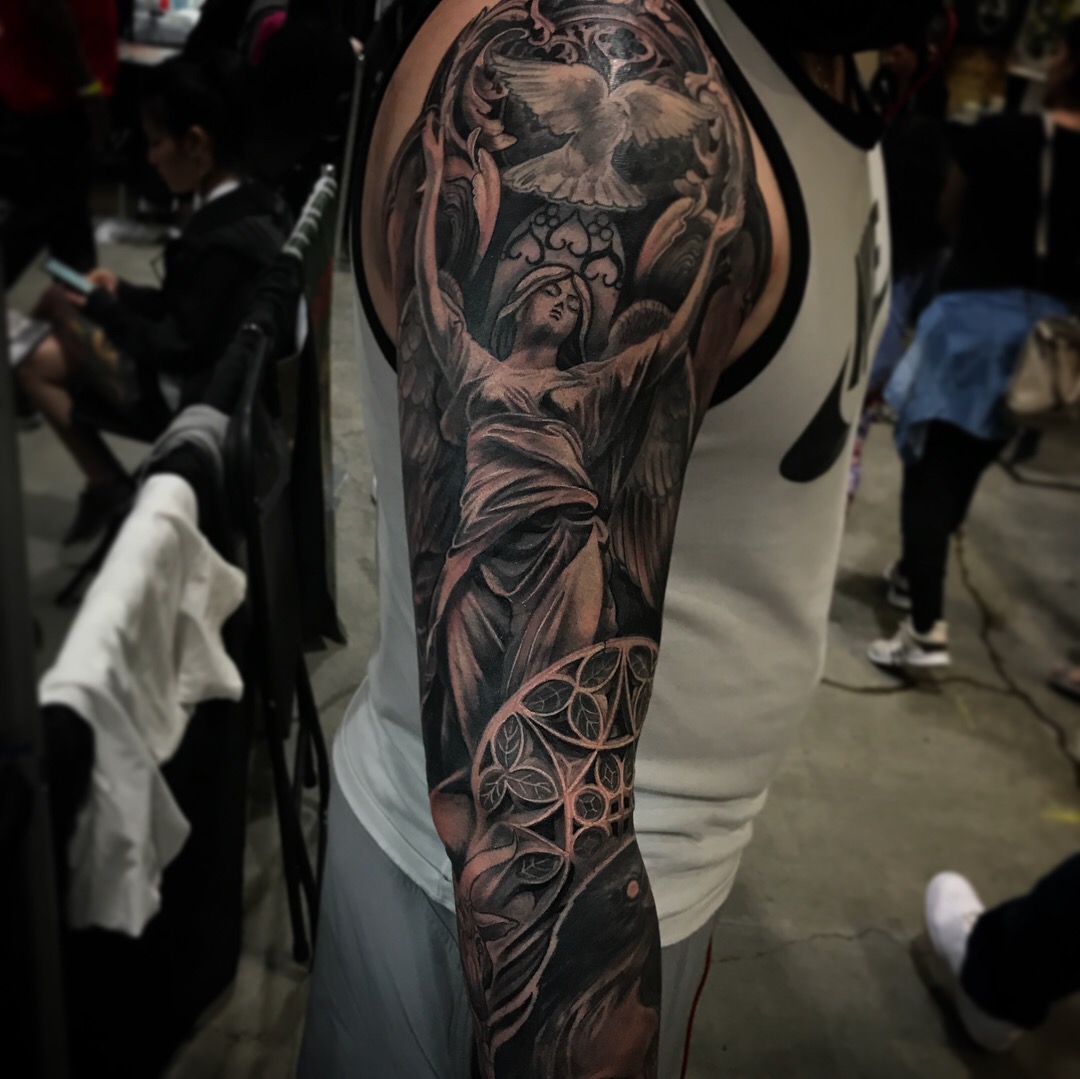 Vinny Nguyen created this design for a client.

As for Nguyen, he specializes in Oriental style tattoos, often larger pieces that he appreciates for their timelessness and significance. Because of their size – and the expense – he has developed a technique that allows him to cover large surfaces of the body with fewer visits, doing a sleeve, for instance, in a matter of weeks as opposed to months.

He begins by creating a foundational tattoo, then builds off it in a manner he likens to oil painting. Using the elasticity of skin and his machines, Nguyen’s clients come in for four hours over two days, then wait two weeks before repeating the process, and another two weeks before the final session. This process reduces the trauma to the skin, he says. He and his other artists guarantee their work: if the site doesn’t heal properly, even due to the client’s own fault, they’ll touch it up (or re-pierce it) for free.

“I feel weird saying this, but [tattooing] is like doing drugs,” said Nguyen. “Once you do it, it gives you that endorphin high. At first, I thought I was just going to give it two years...but it’s that high that makes me feel like it’s worth it, like it might be my calling, so I pursued it and ten years later, here I am,” he said, gesturing to the shop around him.

Nguyen hopes to open more parlors throughout Greater Boston and has plans to open a tattoo removal shop in Dorchester by early 2019. He’s more into giving tattoos than removing them, though. “When you see something that you worked so hard for, and to be able to do it on someone else and to make them so happy, it makes me feel like I’m not doing something meaningless,” he said.