Community activists brought a Glover’s Corner planning meeting to a dramatic halt on Wednesday night, interrupting the city-led transportation discussion to speak out about displacement and call for a moratorium until they were satisfied that the process would adequately include community input.

The meeting, taking place at the IBEW union hall on Freeport Street, was a transit-focused workshop building on a series of public meetings, walkabouts, comment periods, and other workshops since the Boston Planning and Development Agency’s PLAN: Glover’s Corner study got underway in January.

At the 40-minute mark, as officials explained the connection between land use and transportation planning, Ngoc-Tran Vu quietly walked up to the front of the hall and took the microphone.

“I am here with many voices and people of the community who are feeling left out of this planning process,” the Vietnamese artist and Fields Corner resident said. She and others called for “development without displacement.”

Dozens of attendees stood from their chairs and gathered around the room, bearing signs reading “Don’t Displace Boston Residents,” “Dorchester Is More Than Money,” and the protesting collective’s name: “Dorchester Not For Sale.”

Mimi Ramos, director of the Dorchester-based advocacy group New England United for Justice, said, “We have been coming together as one community under one Dorchester because we care about our neighborhood. We care about the future and the direction that Dorchester takes and let’s be clear: we don’t want to just come to meetings so that you have our names and information on a sign-in sheet. We want a real process, we want real decisions, and because it is our community.”

The group has been meeting since the spring and includes local organizations like Dorchester People For Peace, the Asian American Resource Workshop, the Massachusetts Affordable Housing Alliance (MAHA), and CityLife/Vida Urbana. After an October meeting with BPDA staff and subsequent letters in November did not garner satisfactory — or any— response, they decided Wednesday’s action was a necessary attention-grabbing move.

Along with the moratorium, they want detailed data and data analysis on the area’s demographics and potential impact before moving forward with conversations. Interpretation, food, and childcare at all future BPDA-sponsored Glover’s Corner meetings are also requested. 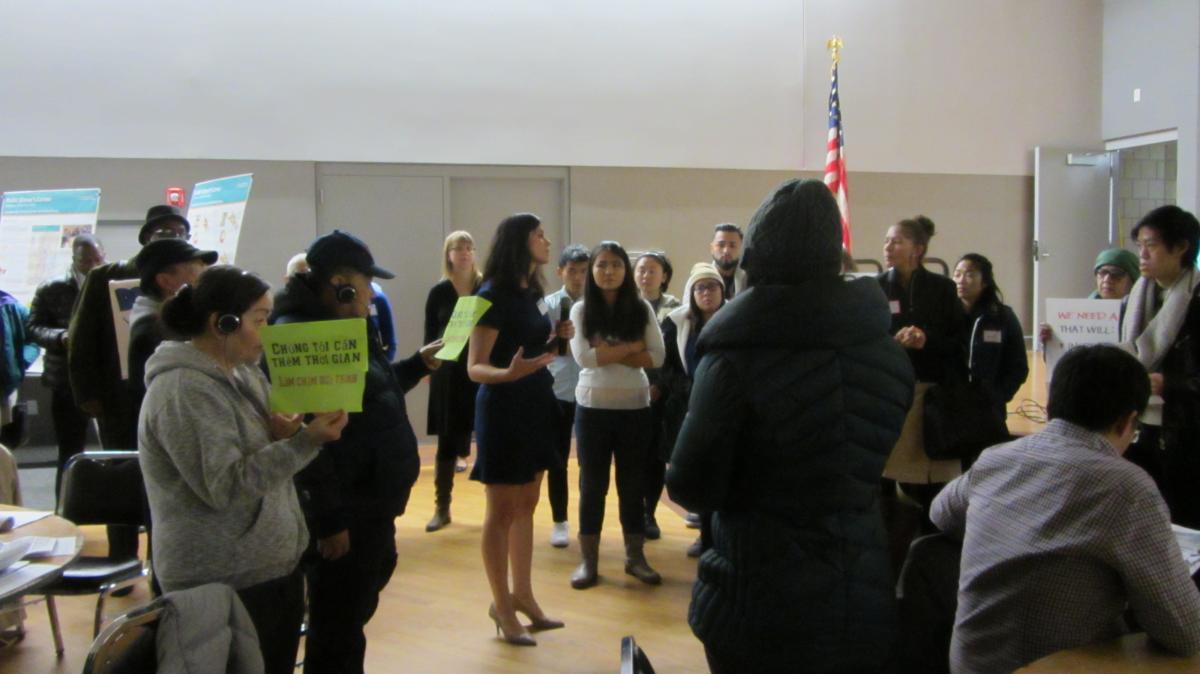 Lara Mérida, BPDA deputy director for community planning, briefly attempted to take back the microphone, then spoke after the protestors concluded.

“I think we’re here all for the same reason,” she said, “and I know workshops are tough.”

She said they had been trying to bring in people from the community to the meetings and were still working on assessing the data. “So I think what we need to do is to keep having these conversations together, and we’re all at the table, we all have the same goal of wanting to make sure we’re making an equitable neighborhood that’s right for everyone and gives people choices.”

She told press afterward, “A moratorium is tricky because we’re all trying to learn from each other. I wouldn’t want to have a moratorium on talking.”

The protestors, dissatisfied with the response, filed out of the room.

City Councillor Frank Baker spoke to those who remained in the hall, apologizing for the disruption and making a case for development along the largely industrial swath of Dorchester Avenue.

Baker and planners said they hoped those who showed up to protest would return and participate in the process going forward.

Some who were at the meeting to discuss the transit-specific concerns were distressed by the protest. One elderly Vietnamese man gestured at the vacated tables, asking the activists to “sit down and talk. Sit down at the table. You want a voice?”

A number of the Dorchester Not For Sale members are frequent faces at planning meetings and Glover’s Corner project gatherings. Long-time neighborhood advocates Janet Jones and Davida Andelman said the city has not been responsive or inclusive enough with the community.

“At all the other meetings I’ve been concerned about development and overdevelopment, starting with DotBlock,” Jones said, referring to the mixed-use project planned for a prominent Glover’s Corner site and included in the city study area. They want to see “serious affordability, really good jobs, no displacement, open space.”

They are not responding to a particular proposed affordable housing level, as the planning discussions have not reached that stage, but cited the success of advocates around the JP/Rox planning study as a model. In its final form, the JP/Rox plan slated 40 percent of future development to be affordable.

Barbara Rice, a community organizer with MAHA, said in an interview Thursday that the affordable housing group has been working with Dorchester Not For Sale because many of its homebuyer program graduates are unable to find housing in the neighborhoods or city they’ve long called home.

At an October workshop — the first meant to drill down into priority areas of land use, housing, jobs, and transit identified in prior meetings — attendees identified areas where they would like to see varying types of land use. The pie chart drawn from the meeting “will inform the conversation,” as would any feedback offered in subsequent workshops, BPDA senior planner Viktorija Abolina said.

Vivian Ortiz with Mattapan Food and Fitness was at Wednesday’s meeting to observe and take cues from this planning process in anticipation of major development coming to Mattapan. Standing in the foyer after the protesters disperse, Ortiz said she was “torn” by the proceedings.

“Because I totally want to be with them and want to get information of how it was that they were able to [organize],” she said, “but at the same time I really wanted to talk about the fact that we need to make Dorchester Avenue a much safer place for everyone to bike and walk.”

About one-third of attendees remained in the hall, returning to the planned discussion and small group activities. BPDA planner Abolina said they would return to the transportation topic in the future, and a meeting specifically on housing is planned for January 10.

Related Content:
What is the route for success in planning for the new Glover’s Corner? Dorchester Not For Sale and the BPDA respond. 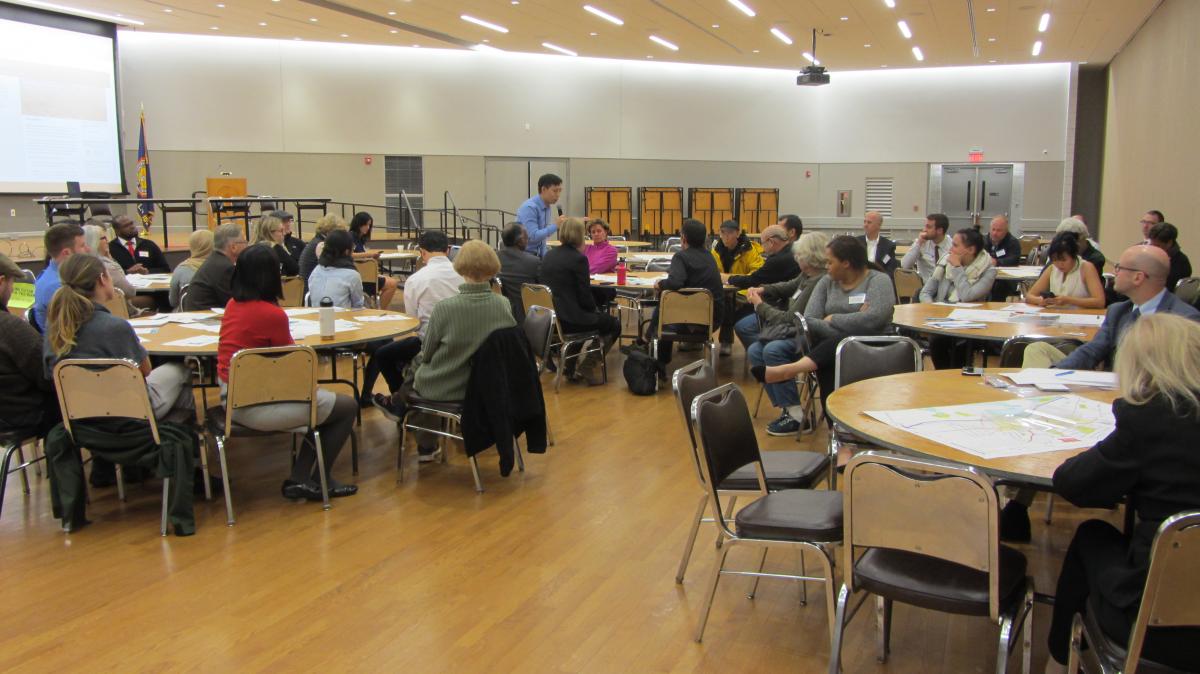