Taylor Turnquist lines up a shot in the championship game against the Minnesota Whitecaps. Boston Pride photo

On Saturday, March 27, in a nail-biter of a game played at their home city’s Warrior Ice Arena, the Boston Pride of the National Women’s Hockey League (NWHL) defeated the Minnesota Whitecaps, 4-3, on a power-play goal by Taylor Wenczkowski with six minutes to go in regulation to become the first two-time winner of the Isobel Cup, the symbol of the league’s championship.

Pride General Manager Karilyn Pilch was full of praise for both teams after the game. “We played an excellent game against each other,” she said. “For people to see that that’s what we’re going to bring to the table is a big moment for us,” she said, referring to how NWHL teams play hockey and the fact that the game was broadcast by ESPN.

While the league is cast nationwide, no fewer than four players on this year’s championship outfit – Taylor Turnquist, Tori Sullivan, Christina Putigna, and Carlee Turner – share an apartment in Dorchester throughout the season, and all but Turner still call Savin Hill their home.
With all that talent in one apartment, Pilch said, “The Belfort Street Crew definitely has a big impact on the Boston Pride.”

Unlike NHL players, their large-scale male counterparts, most NWHL players work at day jobs while keeping up with their professional hockey practice and game scheduling.

Of the Belfort Street Four, Turnquist works at the New England Center for Children (NECC) as a Level II teacher. Sullivan does “a bit of everything,” according to Pilch, including graphic design for the league, private consulting around youth hockey, and childcare. Putigna works for the Pride as a Youth Ambassador, coach, and public-facing player. And Turner works at Massachusetts General Hospital as a medical assistant.

While all four successfully balanced the demands of professional hockey with those of their other jobs during the 2021 season, Turnquist’s schedule was particularly impressive.

“A lot of people think I’m crazy, but I usually wake up at six o’clock,” she said. “I always make sure I have time to have a good breakfast—taking care of my health is really important to me. I work from 8-4 most days, and then I go to the gym. By the time I get back home, it’s almost 7. I have dinner, and then usually have twenty-five minutes to a half-hour to relax until I head to the rink at about 8 o’clock. Practice is usually from 9 to 10 or 10:15. By the time I get home, it’s close to 11 and I’m just trying to get in bed as soon as possible.”

All of Turnquist’s hard work has paid off professionally. In addition to excelling on the ice as a strong defensive player for the Pride, she is passionate about her job at the NECC. While applying to graduate school in occupational therapy in her home state of Minnesota, her observation hours at the Children’s Hospital of St. Paul exposed her to children with autism.

“I honestly fell in love with them,” Turnquist said. Her interest in understanding and working with children with autism led her to the NECC and a career that she loves. “It’s very challenging,” she said. “Some days are mentally draining—you never know what can happen day-to-day—but it’s so worth it whenever you can teach a student a new skill. It’s been awesome.”

Though Turnquist, like other members of the NWHL, hopes that women’s professional hockey will one day provide sustainable salaries for female players, she is excited about her careers both on and off the ice. 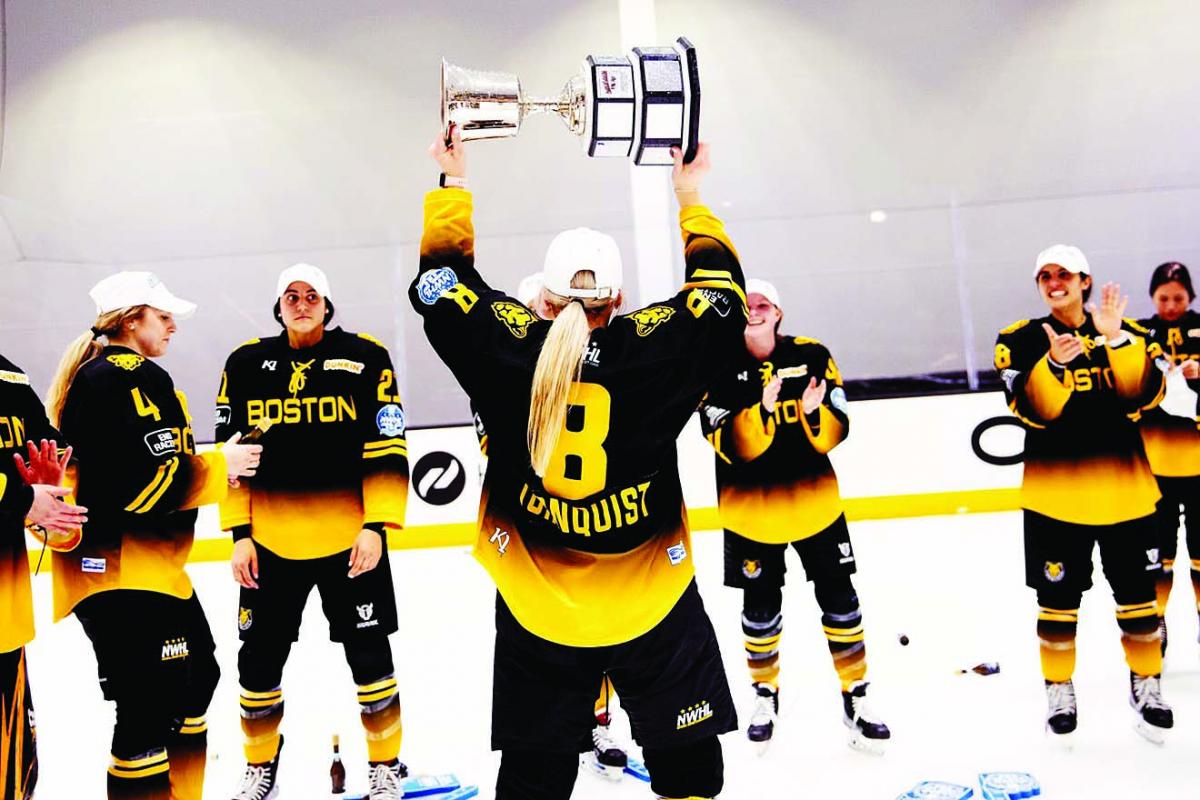 Despite the success of the Boston Pride’s sixth season, a championship was far from guaranteed. The season was derailed by Covid-19 in January. For about a month, players, coaches, and fans were unsure whether or not the Isobel Cup Tournament would take place at all in 2021.

“The season was the ultimate roller coaster ride,” Pilch said. “We’re very, very happy with the way it ended, but we started right after Christmas thinking we were going to have a 20-game schedule [with traveling].” Instead, the NWHL decided to set up an abbreviated, two-week season at Lake Placid within a Covid-19 bubble.

“When the bubble came about, at first I think people were a little bit shocked,” Pilch said. “Everybody has full-time jobs that they’re managing. But if anything, the pandemic has given people the ability to work from home, and I think that really worked to our favor. … Of course, Covid came along again. Unfortunately, there are things outside of your control, so everything gets paused.”

A day before the playoffs were set to begin in Lake Placid, the NWHL suspended the 2021 season due to spreading Covid-19 cases inside the league bubble. Unfortunately, many Pride players fell ill during the tournament.

According to Turnquist, “Most of us did get Covid. I think it brought our team closer. It could’ve been something that tears a team apart, but we were all there for each other, and being together helped. I think it’s really a testament to the league and the league staff that they were able to re-evaluate.” The NWHL announced on March 8 that it would hold a four-team playoff series in Boston.

“From that point on, it was fire-on-all-cylinders and make sure we’re ready to win that cup,” Pilch added. “Sure enough, that’s what happened. To win the cup in Boston was definitely a very special moment.”

Added Turnquist: “We went to a Celtics game, a Sox game, and a Bruins game. It’s so awesome to see the support from other programs.”

Pilch looks back on the year with pride for her players. “We had a big spotlight on us with our championship game being the first women’s championship game to be aired on a national network, so that was huge. People tuned in from all around the country. For some people, it was the first time they’ve ever had eyes on the NHWL. I think people are really excited when they finally see the product and they see how fast and skilled the players are and how good the hockey is.”

Closer to home, Pilch was thrilled with Mayor Janey’s decision to name April 10 NHWL Boston Pride Day. “All these little pieces really start to come together. Our players are getting credit and the notice they deserve, and I think we’re turning a corner. We’re very lucky to be in Boston, the City of Champions. The Boston Pride is here and we’re here to stay.”