ICE officers are shown in images captured by a jogger, who was approached by the men last Tuesday while he jogged in his neighborhood. Image courtesy Universal Hub

Congresswoman Ayanna Pressley is asking US Immigration and Customs Enforcement (ICE) for more information about an incident last Tuesday afternoon (Oct. 6) involving a Black man who was stopped by ICE officers while jogging in West Roxbury.

Bena Apreala, a Boston native, said he was jogging on VFW Parkway when two SUVs with tinted windows approached, one blocking the sidewalk in front of him and the other pulling up next to him along the street. He said the officers did not identify themselves as law enforcement before questioning him about his identity.

“These guys just hopped out in full camouflage uniforms with masks over their faces, and stopped me, and told me to immediately identify [myself],” he said. “I was confused as to whether or not they were even legitimate authority.”

“When I saw the badge and asked them if they were ICE officers, and they said yes, I explained that I wasn’t an immigrant, I’m born and raised in Boston, and that I have no idea what they’re stopping me for. They said that immigration isn’t the only thing that they investigate and proceeded to question me,” Apreala said.

A Boston police spokesman said the officers “are not members of BPD.”

Apreala said he was not carrying identification while running but he did provide the men with his full name and address. “There was a number of families walking down the street, people who were not Black, and they singled me out to stop me,” he added. 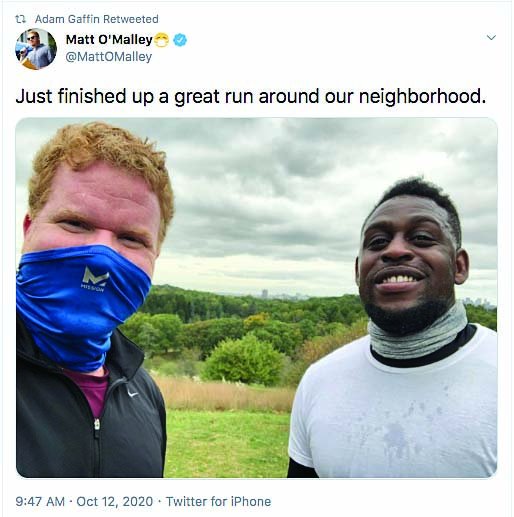 City Councillor Matt O'Malley posted a photo on Oct. 12 showing him and Bena Apreala, a Bostonian who was accosted by ICE officers while jogging last week in West Roxbury, which O'Malley represents on the City Council. Photo courtesy Twitter/Councillor O'Malley's office

In the letter addressed to Tony Pham, ICE senior official performing the duties of director, Pressley expressed her concerns over what she calls the Trump administration’s efforts to terrorize immigrants and implement its “xenophobic agenda.” Pressley says the unlawful questioning of Bena Apreala is the latest troubling example of Trump’s approach.

“This incident has understandably left many in our community fearful of a potential uptick in ICE presence and a possible increase in ICE agents’ enforcement activities in unmarked vehicles,” she wrote in the letter. “Mr. Apreala’s encounter also raises serious questions about whether ICE officers are using enforcement investigations to engage in racial profiling and stop and frisk policing in our communities.”

Citing the deployment of federal US Customs and Border Protection tactical teams into cities like Boston, Pressley called Trump’s actions a pattern of “escalated hostilities targeting cities throughout the country who uphold the safety and humanity of our immigrant neighbors.”

After confirming it was indeed ICE officers who stopped Apreala, the ICE Enforcement and Removal Operations office released a statement on Oct. 7, saying the officers believed Apreala matched the description of a previously deported Haitian national who ICE says is wanted on criminal drug trafficking charges.

The ICE statement did dispute one part of Apreala’s version of events, claiming the officers did identify themselves when they approached him.
US Senators Ed Markey and Elizabeth Warren, along with US representatives Stephen Lynch and Pressley, sent a separate letter to ICE leadership  expressing concerns over the legality of ICE’s actions in West Roxbury and asking for more details about ICE’s interaction with Apreala, and data on ICE stops in the Boston area, by Oct. 15.

Apreala said he plans to file a formal complaint with US Immigration and Customs Enforcement.

Boston City Councillor Matt O’Malley, who represents West Roxbury, called the stop “unlawful” and said he would address the issue with federal representatives.

As Apreala was walking away, one of the men is heard on the video asking him whether he has tattoos on his arms, requesting that Apreala roll up his sleeves. “Am I free to go?” he asked. “Do I have to show you? If I’m free to go, then I’m not showing you anything.”

This story was first published by WBUR 90.9FM on Oct. 7. The Reporter and WBUR share content through a media partnership.