Most of us are finally starting to embrace the new abnormal. That’s one takeaway from a newly published poll tracking the behavior of Massachusetts residents.

The survey, sponsored by Blue Cross Blue Shield of Massachusetts and conducted by The MassINC Polling Group, was taken during March 20-23. It is the “second wave” of data gathered by the MassInc team, which conducted its first poll on the subject the week before (March 16-19). The data show that we are, in fact, “taking more steps to distance [our]selves from others as the coronavirus crisis continues.”

Here are some of the key findings, as summarized by the pollsters themselves:

“Residents are increasingly taking social distancing actions to help slow the spread of the virus. Since the first wave, which ended late last week, 60 percent now say they are not seeing or visiting anyone, up from 46 percent.

“Similarly, 82 percent report cancelling social plans, up from an already-high 72 percent just a few days earlier. When it comes shopping, 74 percent say they are only going to stores if it is essential, and another 11 percent are not going at all.”

That’s moving in the right direction, particularly when we consider that Gov. Baker’s directive for non-essential workers to “stay-at-home” just kicked in on March 24 and would not be reflected in these numbers. 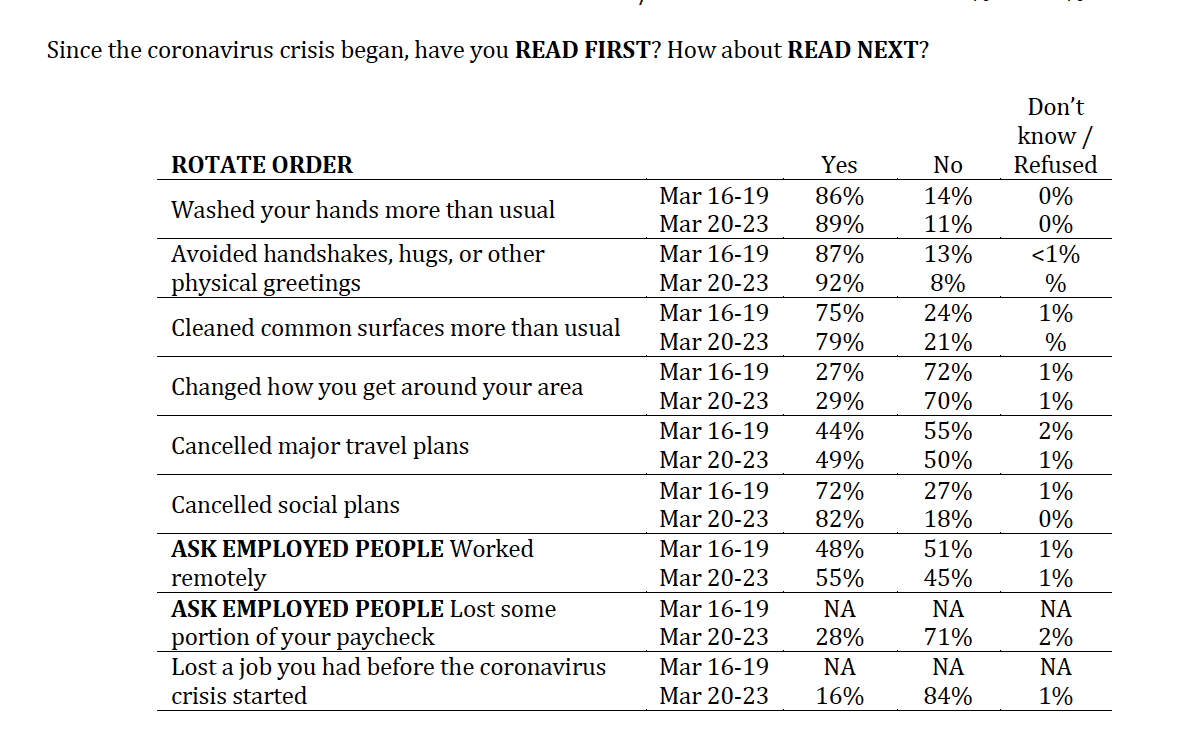 • 16 percent of respondents report losing a job, and 28 percent of those still employed reporting losing some portion of their paycheck.

• Of those polled, 65 percent say the crisis is “very serious,” compared to 58 percent last week. “Combined with the 25 percent who say it is “somewhat serious,” concern over coronavirus in Massachusetts is nearly universal,” says Steve Koczela, who is president of the MassInc Polling Group.

• The poll also indicates that a vast majority of Massachusetts people think that the official response to the crisis has either been “about right” (59 percent) or that it “has not gone far enough” (27 percent).

The polling jibes with what we’ve been seeking this week in Boston, even before the order from Baker went into effect at noontime Tuesday. Fewer people are out and about. The weekday peak commute for those still on the roads is lighter than a sleepy Sunday morning. And people are, by and large, avoiding contact with each other, even if they are out for walks or bike ride on the Greenway.

This is good news. And, if people needed further confirmation that it’s absolutely necessary to adhere to the advice from Baker and Mayor Walsh, we got more this week. On Monday, we learned that a second Bostonian had died from illness related to the COVID-19 virus. “With each tragic loss, it’s a reminder of how dangerous this situation is that we’re living in,” said Walsh in announcing the news outside City Hall.

The mayor urged Bostonians to help the city avoid a larger spike in case numbers by simply staying home.

“The best way to show gratitude to the people on the front lines of this is to stay home— because so many people can’t stay home,” said the mayor. “Physical distancing is the most effective way we have to slow the spread, to keep people healthy and to preserve our medical capacity.”

The city, Walsh said, will not deploy police or other personnel to enforce the governor’s order. He’s expecting Bostonians to step up and police ourselves.

“Right now, it’s a common sense thing,” he said. “All you have to do is look to Italy and see the number of deaths happening in Italy. We want to prevent that from happening in the United States and Massachusetts and the city of Boston. So, we’re asking businesses to do the right thing here.”