Skip to main content
Sean Smith, Special to the Reporter

Right from the beginning, the idea behind “A Christmas Celtic Sojourn” was to make audiences feel as if they were enjoying the Celtic-flavored celebration of the holiday season in the comfort of their own home – even if they were sitting inside a theater, such as the Cutler Majestic in Boston.

This year, audiences can literally stay at home and see the show, from Dec. 15-20, as if it were in a theatrical setting. Like so many other live events of the past several months, the annual offering of music, dance, and storytelling from Irish, Scottish, and other Celtic, and occasionally non-Celtic, traditions has switched to a virtual format for this year. But thanks to a whole lot of planning, creative thinking, and technological prowess, “Christmas Celtic Sojourn” 2020 might well seem to defy time and space.

“Christmas Celtic Sojourn” has cultivated a movable-feast persona over the years, touring elsewhere in Massachusetts and other parts of New England before finishing up at the Cutler Majestic. And that aspect will hold true this year, in both real and symbolic ways that are equally meaningful. Each performance will be presented in collaboration with a “Christmas Celtic Sojourn” partner venue: the VETS in Providence (Dec. 15), the Hanover Theatre in Worcester (Dec. 16), the Zeiterion in New Bedford (Dec. 17),  the Shalin Liu Performance Center in Rockport – where the 2020 production was recorded – (Dec. 18) and the Cutler Majestic (Dec. 19); all shows will be streamed beginning at 7:30 p.m. The final performance will take place at WGBH, which has provided extensive support for “Christmas Celtic Sojourn,” on Dec. 20 at 4 p.m.

A portion of every ticket purchased – they are available at christmasceltic.com – will go to support a partner venue. Each show will be in real time, and available on demand from Dec. 21 until Jan. 2, especially for those who buy tickets.

For each night of the show’s run, O’Donovan will start off with an introduction that evokes one of these partner venues. “It might be something like ‘Well, here we are at the Zeiterion in New Bedford, which has been a beacon of light for so many,’” he explained. “There’ll be local history or local color of some kind mentioned, as if we were indeed right there in that city. Why do this? Because these theaters are all sitting dark, and we want to let them know we’re thinking of them. It’s our way of saying, ‘Here is your Christmas show.’” 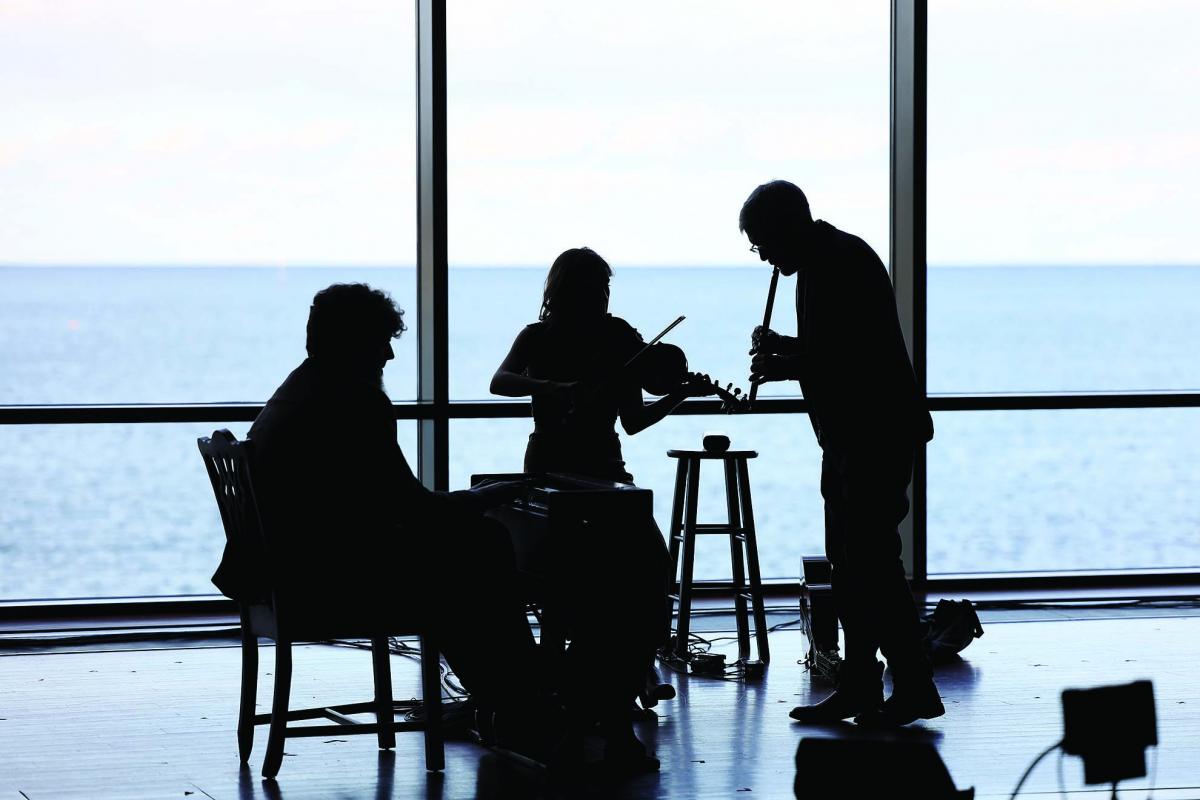 The Shalin Liu Performance Center in Rockport proved an inspiring setting in which to produce this year’s “A Christmas Celtic Sojourn,” which will take place in virtual format December 15-20.

As always, “Christmas Celtic Sojourn” will have its share of both new and familiar faces among the cast. The ensemble will have a distinct Boston/New England character: Owen Marshall is a member of the Maine-based quartet The Press Gang and has frequently appeared in many Boston-area musical collaborations; Jenna Moynihan, a member of Laura Cortese & the Dance Cards and in a duo with harpist Mairi Chaimbeul, has been in Boston for more than a decade; Maura Shawn Scanlin and Conor Hearn, also locals, perform as Irish/Scottish/Americana-influenced Rakish and as part of the band Pumpkin Bread.

As for the guest performers, Cathy Jordan will be familiar to many as the lead singer of the popular Irish band Dervish and the “Atlantic Fringe” trio The Unwanted. Others have all appeared in “Christmas Celtic Sojourn” before – notably Aoife O’Donovan, who along with her mother Lindsay brought a true family dynamic to the show. Eilis Kennedy is a former LiveIreland.com Female Vocal Album of the Year winner; Hannah Rarity made her solo American debut with the show in 2018, the year she won Young Scottish Traditional Musician of the Year honors; Mairi Campbell has earned acclaim as both a singer and musician (her rendition of “Auld Lang Syne” was featured in an episode of “Sex and the City”); Siobhan Miller, lead singer in last year’s production, has won the Scots Trad Music “Best Singer” award three times; four-part harmony a cappella group Windborne’s members are veterans of the Boston and New England folk music scene.

Cara Butler, who has toured regularly with The Chieftains and appeared in the show “Dancing on Dangerous Ground,” and Nic Gareiss – known for his unique footwork and joie de vivre – also have been part of “Christmas Celtic Sojourn.”

O’Donovan can remember very well when he had the first inkling this year’s “Christmas Celtic Sojourn” was going to have to be reconceived: Appropriately enough, it was after the performance of the “St. Patrick’s Day Celtic Sojourn” at the Shalin Liu on March 11 – the only show he and the cast ended up doing.

“It really was ‘the night before the world closed down,’” he recalled. “The situation was getting very concerning, of course, but we were able to get in that one show. And that’s when it began to hit me that this pandemic was going to last a long time. I was hoping I was wrong, but within a week or two it was clear we would have to do something different.”

This prompted a series of conversations between O’Donovan and his circle of musicians, staff, and other “Christmas Celtic Sojourn” cohorts on live-performance alternatives. As the ideas began to accumulate, they believed they could put together something that would include all the show’s familiar elements, from songs and dances to O’Donovan’s readings and musings as well as his on-stage conversations with the artists.

So, earlier this fall, O’Donovan and the core ensemble and technical crew “bubbled up” for two weeks in Rockport – spending the days in the Shalin Liu working on the production and staying the nights at nearby generously donated residences.

“We followed all the protocols,” said O’Donovan. “We were tested multiple times, we wore masks and stayed socially distanced as needed. My wife Lindsay would leave food for us on the porch.”

One of the more challenging facets of the production was incorporating the special guests, since they were scattered far and wide: Jordan and Kennedy in Ireland; Campbell, Miller, and Rarity in Scotland; Butler in Canada; Gareiss in Michigan; Windborne in Vermont; and Aoife O’Donovan and Jacobsen in New York City. But they were able to record their individual parts and send these to the technical crew, who synched them up with the ensemble track, creating a seamless final product.

“Again, as much as we would’ve loved to have all these performers with us and on stage, doing it this way made for something very special,” said O’Donovan, who lauds the audio and visual technicians for their handiwork. “Cathy Jordan will be singing ‘O Come Ye Emmanuel’ from a cathedral in Sligo, for example, while Eilis Kennedy will offer a beautiful song in Irish from her family pub in Dingle, Co. Kerry. So you get all these different settings, atmospheres and moods, which adds a lot.”

O’Donovan will be eager as anyone to get back to a live “Christmas Celtic Sojourn,” but the experience of creating a virtual version has been a revelation. “The pandemic has forced us to make decisions we wouldn’t have otherwise, and, of course, some of these were unfortunate – not being able to tour and present the show in our partner venues. But lemonade from lemons: The technology we used gave us great opportunities for collaborations, enabling us to bring in people who could never have been able to participate otherwise, and we were able to move in new directions to create art.

“I really see us incorporating the lessons learned this year in future ‘Christmas Celtic Sojourns’ – which we hope and trust will be back on stage.”

The “A Christmas Celtic Sojourn” website, christmasceltic.com, contains links to this year’s performers. It also includes the “A Christmas Miscellany” section, which invites viewers to become patrons for the show; those who do will have access to exclusive show-related video and audio content, and even holiday-related recipes and crafts.